Rough and Tumble, Tough and Rumble

This article appears in the August/September 2015 issue of “The Wedge” newspaper. The newest article of my new regular column for that paper. 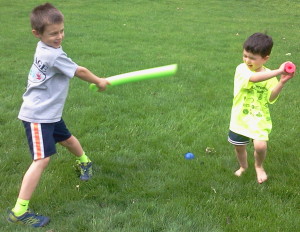 Rough and Tumble, Tough and Rumble

“An M.D. and a Ph.D. walked into a bar….” Anthony DeBenedet, M.D. and Lawrence Cohen, Ph.D. may not have met up in a bar but they did get together to write an important book for parents and educators. This book I have seen referenced so many times in my reading, that I had to read it. It is entitled “The Art of Roughhousing: Good Old-Fashioned Horseplay and Why Every Kid Needs It“. In it they espouse the need of children to enjoy rough and tumble play. They discuss the research, and psychology, and share many examples of roughhousing activities. They make a “Bold Claim”, “Play – especially active physical play, like roughhousing – makes kids smart, emotionally intelligent, lovable and likable, ethical, physically fit, and joyful.”

Adults often have very little tolerance for this type of play and immediately demand that it end. That is a shame. The authors point out “When a child and parent roughhouse, they activate various areas in each of their brains, including pathways for motor coordination, creativity, and emotional attachment. This coordinated activation builds brain-cell connections, which is another way to say that it builds intelligence….When we say that roughhousing makes kids smart, were talking about building foundations for academic success.”

The authors discuss the work of neuroscientist Dr. Jaak Panksepp. Panksepp’s research also comes up a lot in the books I read about child development and education. Heather Shumaker in her book “It’s OK Not To Share… and Other Renegade Rules for Raising Competent and Compassionate Kids” writes “Studies by Dr. Jaak Panksepp show that rough-and-tumble play helps to develop the brain’s frontal lobe, including the prefrontal cortex. This is the key brain region for executive function, the most complex human abilities. These include self-control, resisting temptation, reasoning, focused attention, working memory, problem solving and cognitive flexibility….having strong executive function is the top predictor of kid’s success.” Also discussing Panksepp’s research, Psychology Today editor Hara Estroff Marano in her book “A Nation of Wimps: the High Cost of Invasive Parenting” writes “Not only does the nervous system need play to fully mature; it appears to need a sufficient amount at a specific time. The evidence so far points to liberal amounts of rough-and-tumble play from ages three to six.”

One important point from Panksepp’s research is the idea that children deprived of play, including rough-and-tumble play, will spend more time in a state of adolescence, and have a more difficult time taking on adult roles and responsibilities. This may explain the correlation between the raise in “extended adolescence” (i.e. “failure to launch”, extended time living with parents, etc…) and the focus on academics at an earlier and earlier age.

Another is the fact that play and especially rough-and-tumble play, generates the production of BDNF, or brain-derived neurotrphic factor in the frontal cortex, hard wiring our Executive Functioning. It is the building block of attention, focus, emotional regulation, and resisting temptation, among others, the major factors for success in school and in life. Panksepp is so convinced by his research that he even defies conventional medical wisdom to suggest that ADHD could be treated more effectively by giving children more unstructured playtime, then by the use of psychostimulants like ritalin. He even suggests that the drugs prescribed for ADHD actually hinder the drive to play, thus creating a vicious cycle and continued dependence on the drugs. Our educational system deprives our children of the one thing they really need to survive and thrive in that very system, play!

Through rough-and-tumble play children become motivated and wired for further academic learning, and gain the executive functioning skills needed for success. They gain valuable social skills as they navigate the give and take inherent in roughhousing. They learn to read the body language and emotions of others, and learn to take on other peoples perspectives. They experience negotiation, cooperation, and compromise as they wrestle one another or an adult. In rough-and-tumble play children practice problem solving skills, inhibiting their impulses, and communication skills. This has all been linked to less “real” aggression in children. Many people think that if we allow our children to “play-fight” or roughhouse they will grow more aggressive. This is simply not true. The reverse is true!

The most important thing that rough-and-tumble play provides for children and adults is Joy!!!

So get down and get dirty, and wrestle with your kids. You may find that you and your children will experience more learning, success, and more happiness.

Comments Off on Rough and Tumble, Tough and Rumble