This article appears in the Dec. 2015 / Jan. 2016 issue of “The Wedge” newspaper. The newest article of my  regular column for that paper. 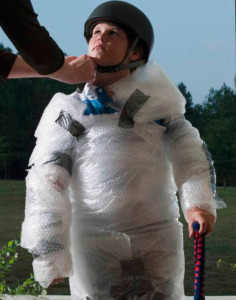 Remember the last time you drove on 490? You got on the on- ramp, sped up and merged with traffic. Maybe you had to change lanes once you got on the highway, then changed lanes again to get to the exit when you needed to get off. You probably didn’t really think that much about what you were doing because your muscle memory kicked in, and you’ve been driving for years. It has become second nature to you.

What you actually did was assess risk, space, and speed. All in the matter of a split second, the blink of an eye. It was like playing a high speed game of three dimensional Tetris, except that your life and the lives of the others on the road were at stake. We rarely think about this while we go about our daily routine. Somewhere along the line you learned how to do this.

As a child you learned how to assess risk through playing. You might have climbed trees, or jumped off of the back of your sofa, or rode your bike down a steep hill. You had to overcome your feelings of fear, which made it less scary the next time. Then you had to figure if it was worth the risk to enjoy the thrill. You evaluated the space as you swung from the monkey bars. You had to calculate how far you needed to swing to get to the next bar, how much force to squeeze out of your muscles as you propelled yourself forward to catch the next bar. You considered speed as you zoomed down the hill on your bike and had to get a feel for how safe you felt at various speeds. The more you did it, the safer you felt at faster speeds. This child’s play led to the time it would eventually take you to learn how to drive and feel confident behind the wheel of your car.

Ah, those were the days! Before our culture was gripped in fear. Before the 24-hour news networks had to fill air time. What better way to drum up ratings (and ad sales) then to tell endless stories of child abductions and freak accidents. Who isn’t concerned and protective of their children? Who wouldn’t want the newest safety product to keep our children safe from harm. There was money to made feeding our fears, especially fear for our children. It seems to me to be the most manipulative marketing machine mankind has ever seen, play on peoples love and care for their children, and it worked!

Children are rarely seen playing outside anymore. We are convinced there is a boogie man lurking behind every corner and in every shadow, just waiting to get our kids. We are worried that our toddler may drown in the toilet, so we buy the newest toilet seat locks. We never let our children out of our sight, not even for a moment. We fear what could happen.

Although it seems there are so many horror stories in the news about crimes against children and childhood injuries, the reality is far from that. Truth is, it’s safer to be a child in America today than it was when we were kids. According to the FBI, all violent crime is down 48% from 1993-2012. According to the Crimes Against Children Research Center, in NY state from 1992-2013 child abuse, including sexual abuse is down 66%. According to the National Center for Missing and Exploited Children, the chances of a child being abducted and killed by a stranger are 1 in 1.5 million or 0.00007%. Overall crime is down and crimes against children are down as well. When it comes to childhood injuries, according to Mariana Brussoni, assistant professor at the University of British Columbia in public health and pediatrics, “As an injury-prevention researcher, I know the data. Kids have never been safer than they are right now.”

Yet children are kept indoors, kept from risky play for fear they may be abducted or injured. On playgrounds, the one place in previous generations where kids could get away from parents and for parents to get some time away from the kids, we see parents hovering and warning their children, “get down, that’s not safe” and “you’re gonna get hurt”, or calling the police on an older gentlemen enjoying the park, because he must be a “creeper.”

At the same time, researchers are finding an increase in anxiety and depression in children. This makes sense as we adults hover and constantly express our anxiety over safety risks, it is inevitably going to rub off on children. As we never allow them to take risks and prove themselves, they never develop a healthy self-esteem and sense of accomplishment. Peter Gray a research professor in the Department of Psychology at Boston College, author and blogger for Psychology Today magazine is very concerned. He writes: “Over the past 60 years we have witnessed, in our culture, a continuous, gradual, but ultimately dramatic decline in children’s opportunities to play freely, without adult control, and especially in their opportunities to play in risky ways. Over the same 60 years we have also witnessed a continuous, gradual, but ultimately dramatic increase in all sorts of childhood mental disorders, especially emotional disorders…We deprive children of free, risky play, ostensibly to protect them from danger, but in the process we set them up for mental breakdowns. Children are designed by nature to teach themselves emotional resilience by playing in risky, emotion-inducing ways. In the long run, we endanger them far more by preventing such play than by allowing it.”

The benefits of allowing children some sensible risk in play overshadow the reality of potential harm. They learn to overcome fear and regulate emotions, measure risk appropriately as time goes on and opportunity presents itself, they gain self-esteem, body and spatial awareness, learn personal responsibility, and learn to cope with hardship, pain or injury, just to name a few.

So, get your kids out there and let them experience a little risk and perceived danger. Let them know that getting hurt is not the end of the world. I am not saying it should be a free-for-all, but as I like to say we should be “not as safe as possible, but as safe as necessary.” You may find they are happier, more resilient and increasingly safer in their decision-making and in life. Then maybe when they are old enough to drive, they will have the skills necessary to navigate 490 as well as you do, if we can get them to put down their cell phones.

Comments Off on Risky Play