This article appears in the June/July 2016 issue of “The Wedge” newspaper. The newest article of my  regular column for that paper. 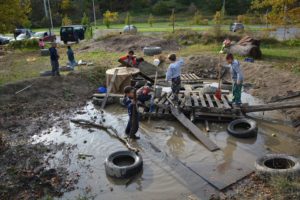 A landscape architect from Denmark in the 1930s and 40s noticed that children weren’t playing on the playgrounds that he designed. He noticed that they played everywhere but. After WWII, children were found playing in the rubble of bombed buildings, and the construction sites of rebuilding efforts. Some people decided to create spaces similar to the rubble and called them “Junk Playgrounds.” This idea took off in Europe in the latter half of the 20th century, and someone had the sense to rename them “adventure playgrounds.” Now there are over a 1,000 of them in Europe and a handful here in the US.

Why are adventure playgrounds so popular with children? Oh, I am so glad that you asked! A google search will give you a pretty good idea. They are dirt-filled, often muddy lots, filled with loose parts, planks, pallets, spools, tires, rope, swings, slides, tools, etc. Often they are seen with a variety of “graffiti” and paint everywhere, and with trenches (often dug by the children) filled with water for more fun. Some are even seen with fires blazing.

A recent documentary called “The Land” features an adventure playground in Wales. It is runs around 30 minutes long and in it you see children climbing and building, swinging and collaborating. You even hear them cussing and see them light things on fire. This film also shows how this is all happening under the supervision of “play workers.” These play workers are adults that have an unobtrusive presence on the playground and only intervene in the play of the children if they are invited or in case of possible serious injury.

This idea might sound scary for a lot of American parents. But children love it! Children love the thrill of adventure, risk, and perceived danger. Children love the freedom to explore, discover, take risks, socialize on their terms, build things, and navigate perilous ground, but most of all, play without an adult hovering about. They feel empowered, learn to assess risk, and gain mastery over their bodies and independence in their souls. They become more confident in their abilities and feel pride in their accomplishments. If you’ve read my articles or blogs about “Risky Play” and “Loose Parts Play,” you will understand more about why children need and are drawn to this type of play.

This is a huge departure from what we have known in the U.S. We are much more risk averse and tend to want to regulate our children’s play and the spaces they play in. This is a shame. We have deprived children of a lot of what that they need to grow into successful and happy adults with our well-intentioned over protection. If you want to learn more why adventure play is much needed and desired by children, google “Adventure Playgrounds,” “Peter Gray” and “Rusty Keeler.”

Speaking of Rusty Keeler, he has created an adventure playground in Ithaca called the “Hands on Nature Anarchy Zone” in the Ithaca Children’s Garden. He also designs and creates play spaces for a living through his business called “Earthplay Design” also in Ithaca, NY.

One of the goals of my business, Progressive Early Learning, is to help bring an “Adventure Playground” to the Rochester area. If you or someone you know is interested in helping with this effort please contact me.

Let’s get outside and play!

Comments Off on Adventure Playgrounds