This article appears in the April/May 2015 issue of “The Wedge” newspaper. The second article of my new regular column for that paper. 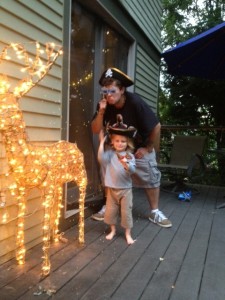 One of the most important skills for children to learn for success in school and life is self-control. We all could use some more of this. Remarkably nature has hardwired humans with one thing we need to really learn self-control–play.

Ellen Galinsky, author of the book Mind in the Making: The Seven Essential Life Skills Every Child Needs identifies seven important executive functioning skills and provides many playful ideas as to how we can help children develop their skills. In one example, she describes her six-year-old daughter’s lemonade stand. She writes:

“It involved counting the number of customers from their last day of sales and then using that number to figure out the amount of lemonade to make; going to the store and buying the ingredients with their profits; reading and following the recipe; keeping track of money; making change for customers; and making signs as well as practicing marketing and sales techniques. In addition, there was the focus and self-control needed just to be at the stand for long stretches of time!…I can still feel their passion for what they were doing. Lemonade stands have become my metaphor for something that children care a lot about. Every child needs lemonade stands throughout childhood. Caring strongly about interests beyond oneself engenders true focus.”

Allowing children to direct their own play, may reveal a passion and interest of theirs that then could lead to serious learning and focus and self-control. When I was growing up, my “lemonade stand” was dinosaurs.  I would try to build a swamp outside to play with my toy dinosaurs. I discovered that when I dug a hole to fill with water for my swamp, the water soaked in, and my swamp would drain. I was determined, and through trial and error, found success. It was only because of my intense interest that I had the persistence to focus my mind and will power. While visiting my grandmother I would make my own books about dinosaurs. She would then buy the books from me. I wanted to take the books home with me, and she kindly let me know that she bought them from me, so she is now the proud owner, and that I couldn’t take them. Any self-control I may have had was tested and strengthened. She said that she bought the books so that she could always enjoy the work of her grandson and when I came to visit I could enjoy them too. She taught me a very wonderful lesson!

Pretend play, often referred to as “Dramatic Play” is one of the best known vehicles for children to learn many skills, especially self-control. Think “Dungeons and Dragons” with props and costumes, role-playing.  The idea that children will exhibit seemingly remarkable amounts of self-control in order to “stay in character” has been explored by researchers. In the book Nurture Shock: New Thinking About Children by Po Bronson and Ashley Merryman, the authors discuss an educational program called “Tools of the Mind” that emphasizes role-playing with children and the incredible success students have had in schools that implement the curriculum. There are many examples, such as a “Tools of the Mind” classroom zooming ahead of the other more traditional classrooms in vocabulary and IQ testing, and reports of significant reductions in the students’ disruptive and aggressive behaviors. In one example, a failing school received grant money to improve their school, implemented “Tools of the Mind”, and within one year saw such huge success that the school district no longer qualified for the grant money.

Researchers have found that even young children show a remarkable ability to stay within the boundaries of their role. I have seen it a lot as an early childhood educator. The child who is pretending to be “mommy,” not breaking character because “Mommy would never do that” or the lion who prowls around the room and will roar and not speak because lions can’t talk. It is amazing to see this level of focus and self-control.

So many of the most important life skills can be learned and strengthened through child lead and child directed play. Provide children with a chance to play and pursue their own interests, you may be pleasantly surprised with the outcome.

Comments Off on Play and Self-Control