Let’s Go Out and Play!

This article appears in the June/July2015 issue of “The Wedge” newspaper. The third article of my new regular column for that paper. 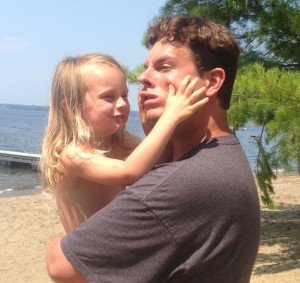 Let’s Go Out and Play!

Maybe we would all be happier and healthier if we went outside to play. I know many adults are very happy at the beach, or hiking, biking, or gardening. Children need to be outside too! Unfortunately, children are spending less and less time outside and and a growing body of evidence shows the detrimental effects this is having on our children.

Richard Louv, the recipient of the 2008 Audobon Medal, wrote a bestselling book entitled Last Child in the Woods: Saving our Children from Nature-Deficit Disorder. Louv writes, “…a growing body of research links our mental, physical, and spiritual health directly to our association with nature in positive ways. Several of these studies suggest that thoughtful exposure of youngsters to nature can even be a powerful form of therapy for attention-deficit disorders and other maladies.”…“ Our society is teaching young people to avoid direct experience in nature.”

He writes of schools allowing less and less recess time outdoors, societal shifts towards electronic media, a mental shift toward fear of criminals and fear of nature itself, as some of the things adding to the problem. He also discusses a lot of research about ADD, ADHD, anxiety and depression among children and how it correlates directly with reduced amounts of time children spend playing outdoors.

A 2012 report from the National Wildlife Federation entitled “The Dirt On Dirt” discusses the benefits of playing outside and especially the health benefits of playing in dirt. In it they too discuss the research and the correlation to health and happiness and quote several studies. They report: “According to a four-year study that examined approximately two million children under the age of 18, antidepressant use is on the rise in kids, with the fastest growing segment found to be preschool children aged 0-5 years.” The good news is “Kids are different when they’re outdoors; free of school pressures and harried schedules, they relax and simply become kids. In fact, according to one study, children’s stress levels fall within minutes of seeing green spaces, making outside play a simple, no-cost, and time efficient antidote for an over-stressed child…Making direct contact with soil, whether through gardening, digging for worms, or making mud pies has been shown to improve mood, reduce anxiety, and facilitate learning….Mycobacterium vaccae, a “friendly” bacteria found in soil, was shown to activate a group of neurons that produce the brain chemical serotonin, enhancing feelings of well-being, much in the same manner as antidepressant drugs and exercise…Beyond raising mood, time kids spend in the dirt may be the best preparation for the classroom…in addition to its antidepressant effect, M. vaccae may also have an effect on schoolwork…Since serotonin plays a role in learning.”

Playing outside in the dirt aids in learning and fights anxiety and depression in our children.

I know of one more wonderful thing outside that has the same effect on children, the sun! The sun, once known as the “giver of life” is now one of the things adults fear allowing our children exposure too. We slather the sunscreen on and reapply repeatedly in an effort to prevent sun burns and skin cancer. That is a valid concern as there is a lot of research on this, however over-application of sunscreen combined with the social trends keeping our children inside, may be harming children as well. The sun is a primary source of vitamin D. Vitamin D has been linked to feelings of happiness and combats depression. American Academy of Pediatrics report 9% of children are vitamin D deficient and 61% of children are Vitamin D insufficient. That is 70% of our children! This has resulted in bone growth and density problems in children, and an increase of injuries as a result. It has also resulted in problems with long term cardiovascular health. Researchers at Albert Einstein College of Medicine of Yeshiva University reported that individuals with low levels of vitamin D may have an increased risk of death from all causes. Dr. Melamed, the leader of that study suggests for parents: “It would be good for them to turn off the TV and send their kids outside. Just 15 to 20 minutes a day should be enough. And unless they burn easily, don’t put sunscreen on them until they’ve been out in the sun for 10 minutes, so they get the good stuff but not sun damage.”

It sounds to me that our children can’t afford to stay inside anymore. With summer upon us we should take every opportunity to get outside with our children. Wait ten or fifteen minutes before applying sunscreen and play in the dirt. We all might be happier and healthier as a result!

Comments Off on Let’s Go Out and Play!